We're turning up the heat 🔥 at our next stop, Miami ☀️!

Since last summer, we've changed from being MIA to being in MIA, and we're excited to share what we've learned! Derrick Holmes and Kevin Amézaga have hopped on board to uncover transit truths in The Magic City ✨ - so stick around. 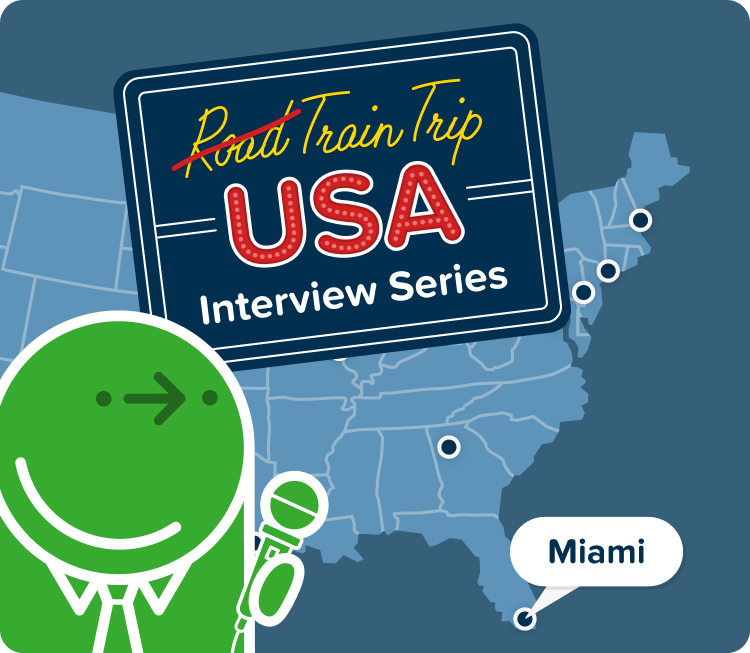 Derrick Holmes is Transit Alliance's Campaign Coordinator and was raised in the South-Dade neighborhood of West Perrine. Before joining the team, he was an HVAC technician and spent hours in traffic wondering why he wasted so much time going nowhere in a car by himself next to thousands of other people. Stressed and frustrated, Derrick attended his first County Commission meeting in 2019 and decided to focus his engagement on transit advocacy and the broader scope of inequities to uplift the quality of life of all people, starting from the bottom with the most marginalized. A fateful tweet led him to a meeting with the Transit Alliance team, and the rest is history. 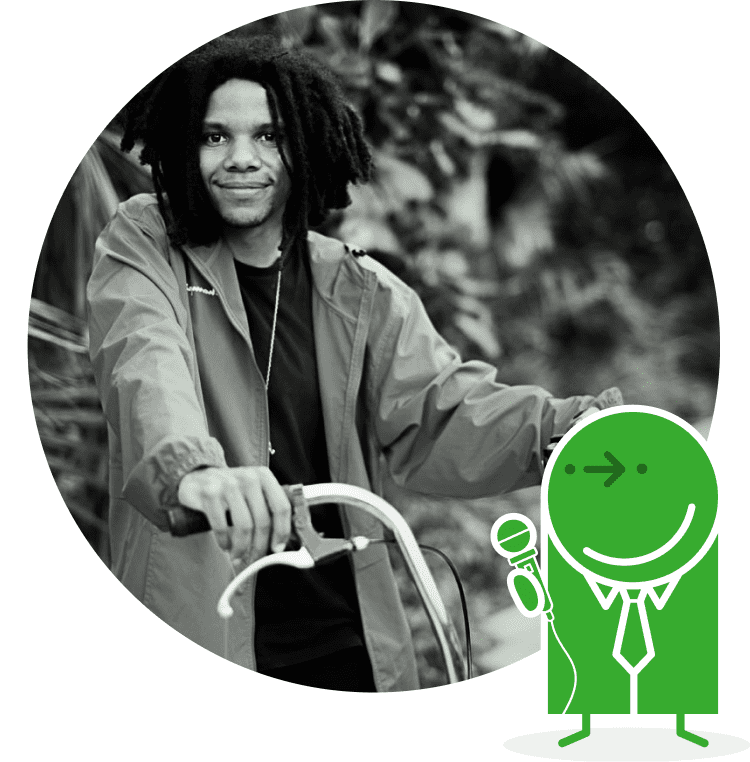 Kevin Amézaga is the President and Director of the Miami Riders Alliance, a local advocacy group fighting for Safer Streets and Better Transit in Miami-Dade County, and works in IT at another local nonprofit, Neighbors 4 Neighbors. Lacking transit growing up in Southwest Miami-Dade, he’s been working to bring transit and safety improvements to underserved-by-transit communities countywide since he was 14. 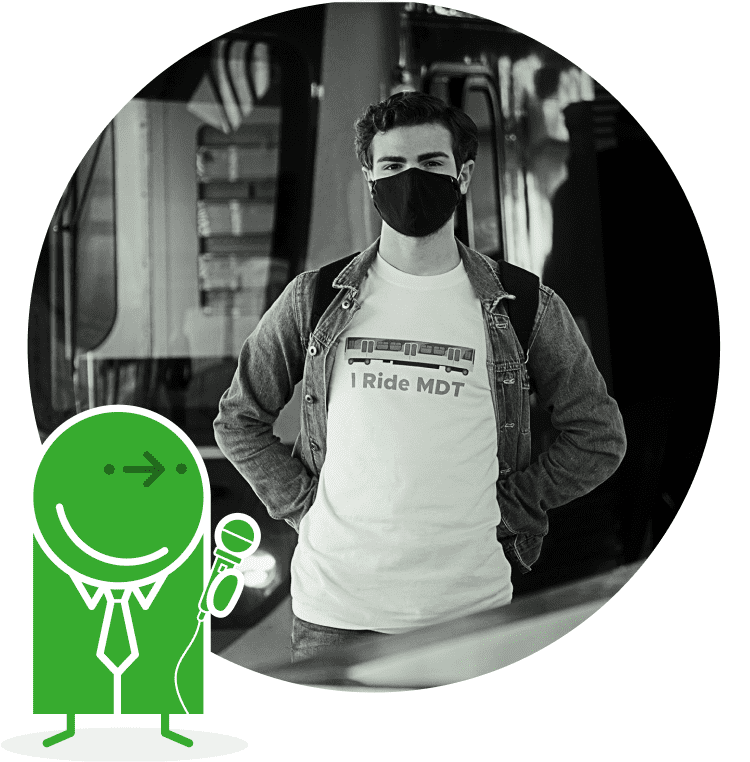 Tell us about the current state of public transit in Miami

Derrick: So, we’re in a pretty interesting transitional period right now. For a world-class city we’ve never truly had a transit system that lives up to the hype of our status and that’s still true to this day.

The good news: We’re about to implement a bus network redesign (the Better Bus Project) for a system that hasn’t been updated since the 80s in a city that’s notoriously car-centric and traffic burdened, and we’re finally moving forward with some of our mass transit expansion plans that date back to the 70s. 👍

More good news 🥁🥁🥁 We have a new Mayor who's been really involved in refocusing our planning to be more pedestrian, public transit, and active transportation oriented, so as an organization, Transit Alliance is really excited about what’s to come. Y’know, this is the Magic City 🔮 we can literally make anything happen if we will it, and that always keeps me optimistic because instead of seeing our transit system as inadequate or a failure and leaving it at that, in my mind it just represents a million opportunities to make something happen. 💪 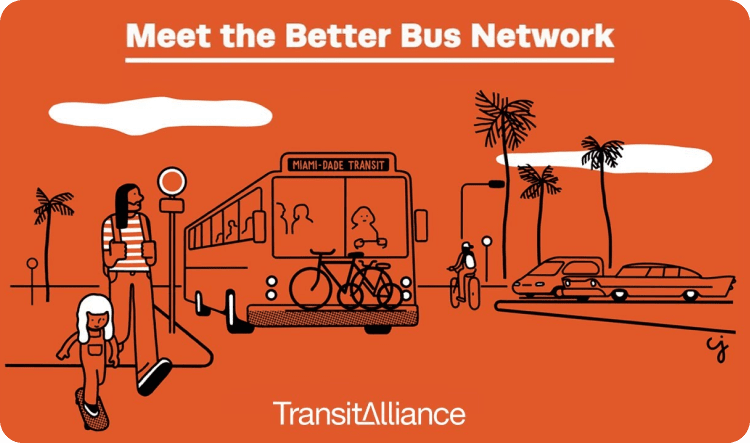 In a post-COVID world, what needs to be done to encourage taking Miami public transit without worrying?

Kevin: In a post-COVID world, I think there will be less convincing we need to do about the safety of public transit but instead a focus on again making public transit competitive with driving; we can do that by improving the system for everyday riders and not just catering to drivers.

I’ve said it throughout the Pandemic: COVID is at the top of everyone’s minds right now, but people will go back to work and traffic will come back. Transportation may not be front and center of Miamians’ worries right now, but it will be again. Pandemics may come and go, but our core urban issues remain. 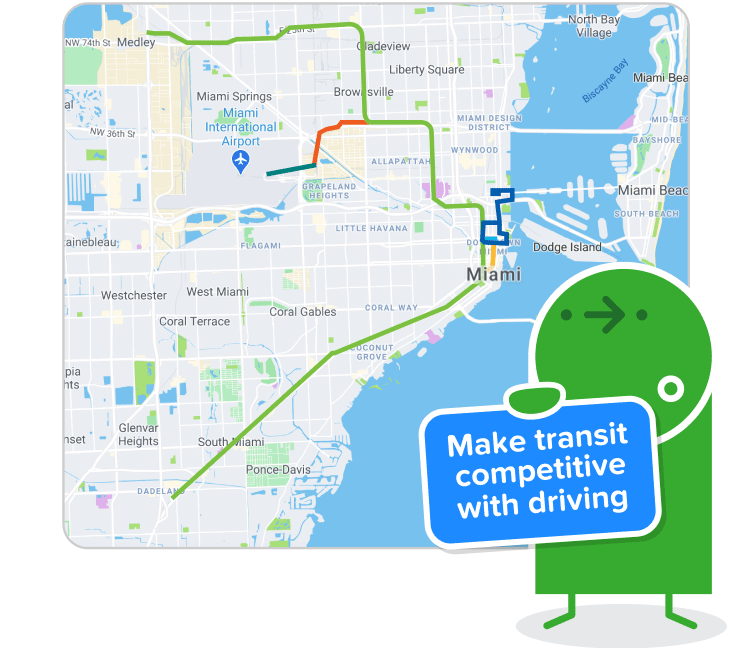 Citymapper has recently launched features that empower active travel (walking, cycling, scootering). How do you see these modes evolving?

Derrick: I mean, I don’t want to think I’m an anomaly, but last year around April I converted my old bicycle into an ebike, threw a milk crate on it and never looked back. 🤩

I think as ebikes and electric scooters become more and more popular as a first/last mile solution or as a primary means to get around dense urban areas and as people choose to keep working from home instead of hopping in their cars to commute 10+ miles to the office, we’re going to have to dedicate more street space to these alternative modes. Cars hate when I’m in the street (even with the sharrows!) and pedestrians hate when I’m on the sidewalk.

The solution, to me, is for pedestrians and e-riders to stop fighting over the sliver of space we get on the sidewalk and take back some of the massive amounts of space we dedicate solely to cars. 🤝 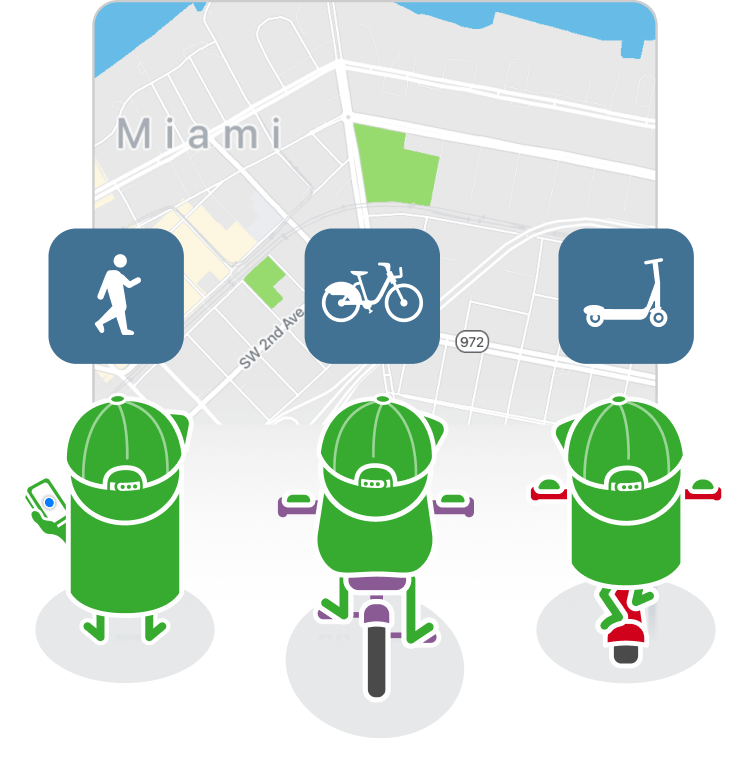 Kevin: Active travel will be a crucial part of life in a post-COVID world. 🚲 🛴 ☀️ Everyone is a pedestrian—even drivers—and getting to and from your mode of transportation is an important step.

If there’s anything good that’s come from COVID, it’s the obvious display of people out on the streets walking, biking, and scootering if they’re given the chance. I see communities across the country adapting to this with new infrastructure like bike lanes, expanded sidewalks, and more. 📈 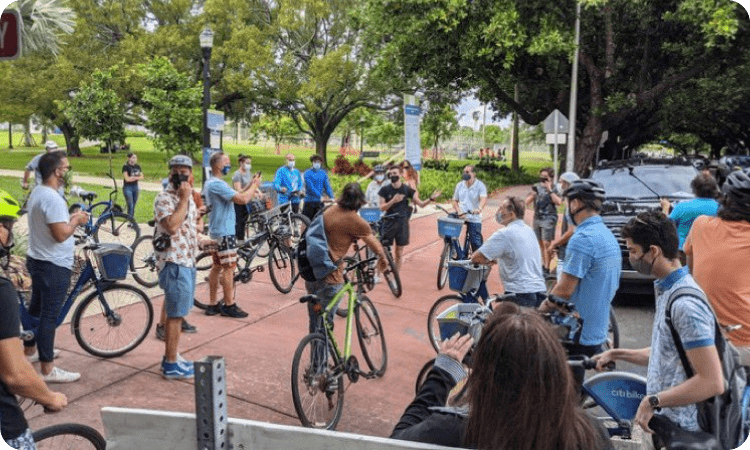 What are the three most important actions that Miami can take to improve public transit?

A) Implement the Better Bus Network 👀

B) Throw money at increasing the frequency and service spans of our buses and Metrorail 🤑 🚌 (people have places to be Monday-Sunday 24/7 in a city where most people work in retail, hospitality and tourism!)

At the end of the day, ALL public transit riders are pedestrians. If walking is a pain (or dangerous, considering Miami has some of the deadliest streets in the nation), people aren’t going to bother using their feet to get them to and from the stops and stations. 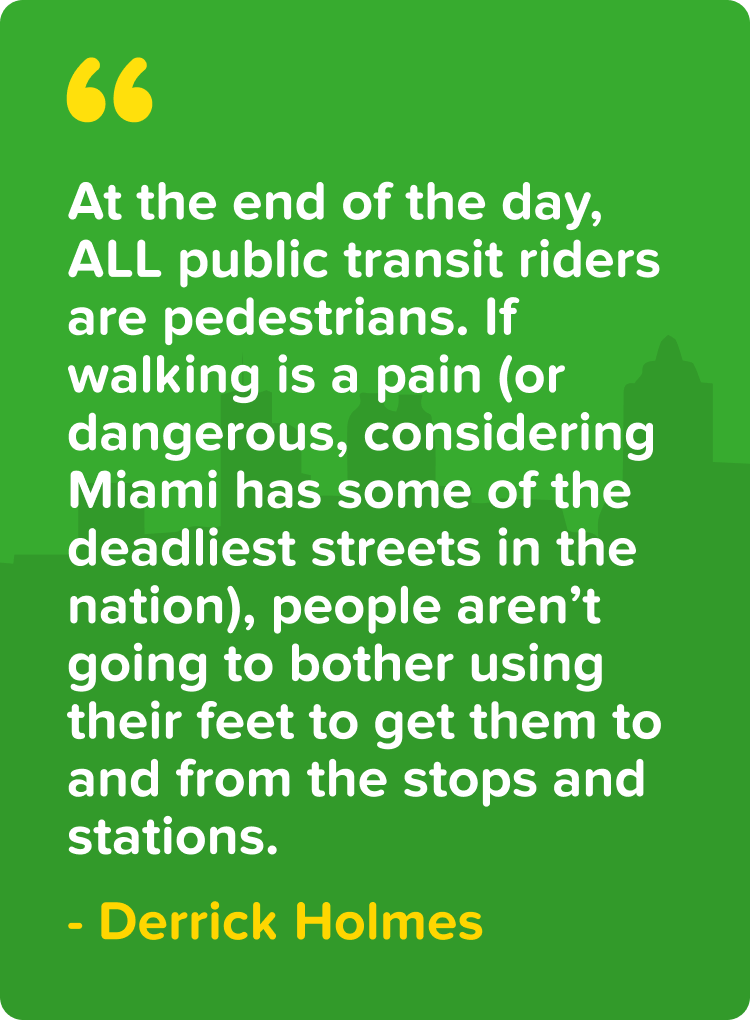 Are there any lessons, case studies, innovations that other American cities can learn from Miami?

Kevin: Miami is a case study in what not to do. 🙉 We lowered taxes and in doing so effectively cut the transit budget. When faced with this shortfall, the transit agency made a contracting deal with a subpar operator—to save money—that offers lower-quality service and doesn’t get people out of their cars. 💪

If you build a transit system that doesn’t even try to compete with driving, you won’t see ridership growth, and the cycle will continue until the system collapses. 👏

How can Citymapper support the future of transit / movement in Miami?

Kevin: Citymapper can help support the future of transit and movement in Miami by letting people know about their options. The one thing I’ve seen the most is that people not only aren’t comfortable with riding transit, but don’t know how to get on, or even pay, in the first place. I think what’s necessary to get people on transit is giving people the knowledge they need to get on that bus, train, or whatever in the first place. 📚 🤓

Derrick: Keep giving people the ability to plan out their multimodal trips in a single app, keep it updated and keep striving to make taking public transit as easy as possible for people. We have our own Miami-Dade transit app, but it’s not the best (putting it nicely). 😁 So to have Citymapper available to us with a staff dedicated to bringing people the best public transit navigation experience possible is a huge step toward making public transit use convenient for current and potential riders. ☝️ 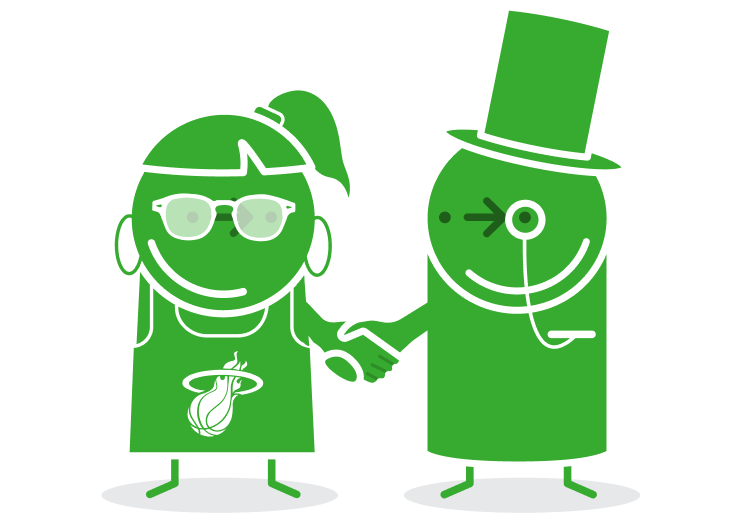 Derrick: HELL yes. Miami is a world-class city without the public transit system to back it up. When I visit NY I’m always completely amazed by how the city was literally built around its transit system. If I need to get somewhere in NY 🍏, I’ll take a train, exit the station and my destination will either be right in front of me or down the block as soon as I walk up the stairs.

That and the fact that public transportation isn’t as much of a class or status symbol in NY. In Miami, because we’re so car dependent, not having a car and relying on transit is seen as an indicator of poverty. In NY, millionaires in Manhattan condos are taking the same public transit that the working class takes. And as crappy as this may sound, that means the public transit system in NY will be protected in a way ours in Miami isn’t. When there’s a problem that doesn’t just affect poor people, but also affects wealthy people with political capital, solutions to those problems always seem to be found and implemented a lot faster. At least that’s how it works here...

Kevin: In terms of public transit expansion (I tend to include bikes as transit, too), I think Seattle 🌻 is doing an amazing job at not only expanding public transit, but keeping people on it even after economic recessions, which is something we haven’t been able to pull off here in Miami.

I follow Dongho Chang (@dongo_chang)—a Traffic Engineer for the City of Seattle—on Twitter, and the progress on everything from transit to safer streets for pedestrians and cyclists, is beyond anything we even have conversations about here in Miami. In a time where we, in our city, are debating installing bike lanes in our urban core, Seattle is installing lean bars on their already-protected-and-constructed bike lanes to make cycling even more comfortable. 🤩

For those efforts, Seattle has been rewarded; even with more jobs in their city center, they’ve seen a decrease in driving-alone rates and higher utilization of transit. The difference is they’re serious about getting people out of their cars and onto transit, and Miami’s just not serious. 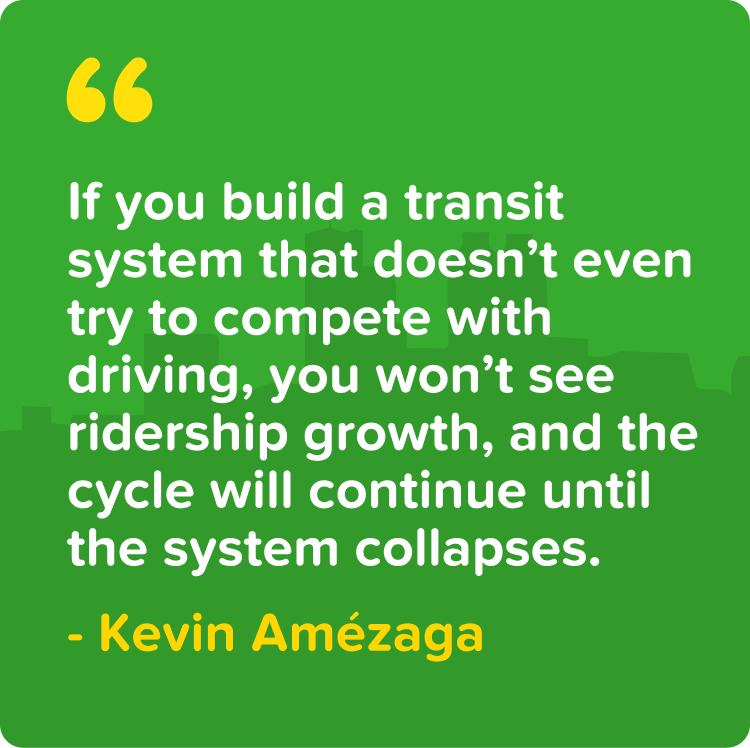 Kevin: My favorite trip is pretty touristy, but I really enjoy the 120 bus along the MacArthur Causeway.

Something about overlooking the Port and skyline just remind me of why I live here in Miami, but also how this place is nothing like it was when I was growing up. 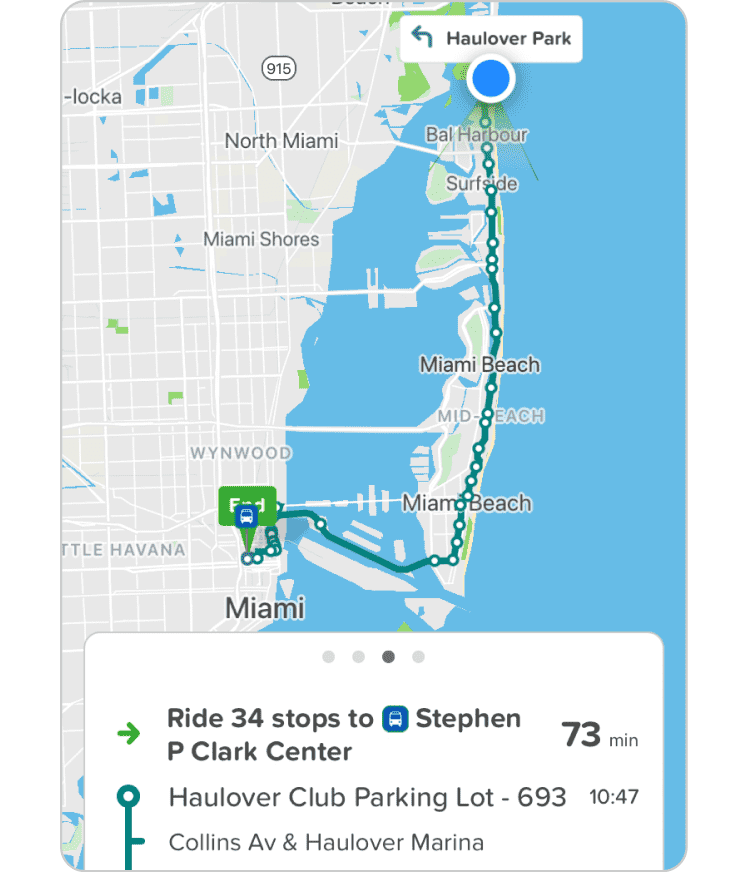 Derrick: Going to work in the mornings pre-pandemic and taking the busway and Metrorail down US1.

When I used to take transit in the morning to get to the office downtown from my home in the suburbs down south, I would chuckle to myself at all the cars I passed by going to the exact same place I was. Why? Because while they were stuck in morning gridlock traffic, I was reading tweets and blasting MF DOOM in my earbuds all the way to work and back.

Derrick: The fact that transit data from around the world is available to everyone to view and download straight from the Citymapper app. It’s neat for people to be able to take a look at the status of their own city’s transit system, but for transit advocates/nerds it’s an invaluable resource. It’s even more crucial in the context of the pandemic and our recovery.

Data like this is constantly being used by cities across the world to figure out what’s working, what isn’t and how to best move forward in the post-pandemic transit world.

Kevin: I think the best feature is the inclusion of micromobility in-app. If people don’t have to worry so much about that first/last mile, it removes a whole roadblock from getting people onto transit.

As far as I’m aware, no other app does that quite as well and with all scooter options. 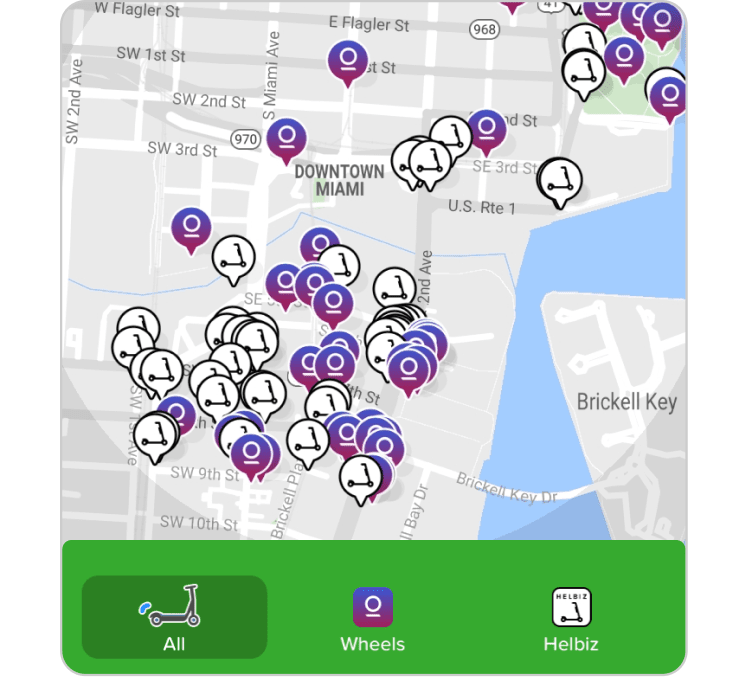 Derrick: Probably Atlanta 🍑 🐝. My brother’s moving up there and I haven’t been since I was a kid. It’d be nice to explore that city and be able to take in the experience as an adult.

Favorite transit meme of all time? Which one is the G.O.A.T? 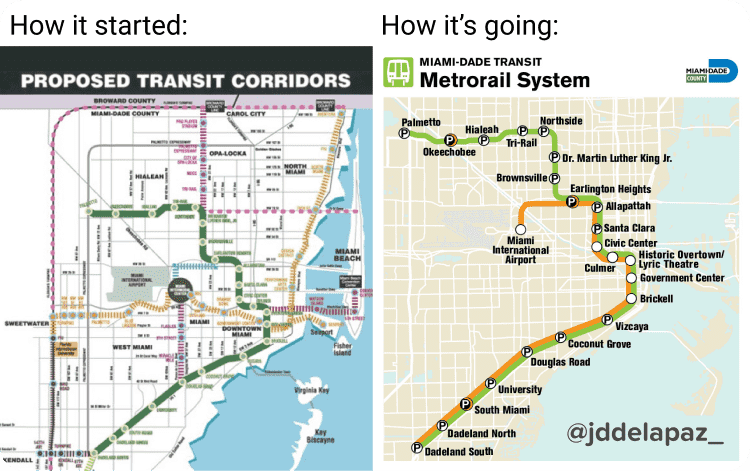 We've enjoyed the sun, but now it's time to grab that puffer jacket and put on a scarf, because we're heading back north🧣 🌤. Stay in "the loop" to see what city we're in next 😉!

PS. Have any thoughts on movement in Miami? Should we come to your city next? Don't be shy - drop us a line here or tweet at us @Citymapper